Carmelo Pizzino, the popular dancer best-known as the man who has steered Lara Bingle, Tamara Jaber, and Kylie Gilles to dancing success on TV’s Dancing With The Stars, is set to join the illustrious line-up at Sydney’s most prestigious bridal event: the Ultimate Wedding Planning Party (UWPP).
His plan is to dazzle the assembled crowd with his dance moves – one couple at a time. Several surprises are planned for the evening, as he takes to the dance floor with fellow DWTS dancer Alana Patience (who just won the TV comp with Manu Feildel). Away from the spotlight, Carmelo is actively taking engaged couples under his well-toned wing and teaching them the moves to dazzle their guests on their wedding day.
Says Carmelo: “There is much emotion associated with a newly married couples’ first dance. It is set to music which means a lot to the couple, it has meaning and it is their moment which they will remember forever.
“Many women are willing participants, but often their men are a little hesitant. I love seeing a man go from reluctant to a willing participant, taking on the challenge to learn how to dance.”
Making his Dancing With The Stars debut in series four, first partnering TV stalwart Noeline Brown, then returning in series five with chess champ Arianne Caoili, reaching the grand final. He then showed graceful moves to Kylie Gilles, Tamara Jaber, and most recently Lara Bingle.
Carmelo is available for interview, comment, and photo opportunities for the UWPP, taking place on Thursday August 25, 2011 at the Sydney Opera House.
Ticket prices from $80, to purchase tickets and more information, log onto www.ultimateweddingplanningparty.com or contact 02 9328 5333. 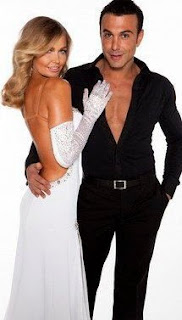